Is It Worth Applying For A Role If Someone Else Is Acting In It? 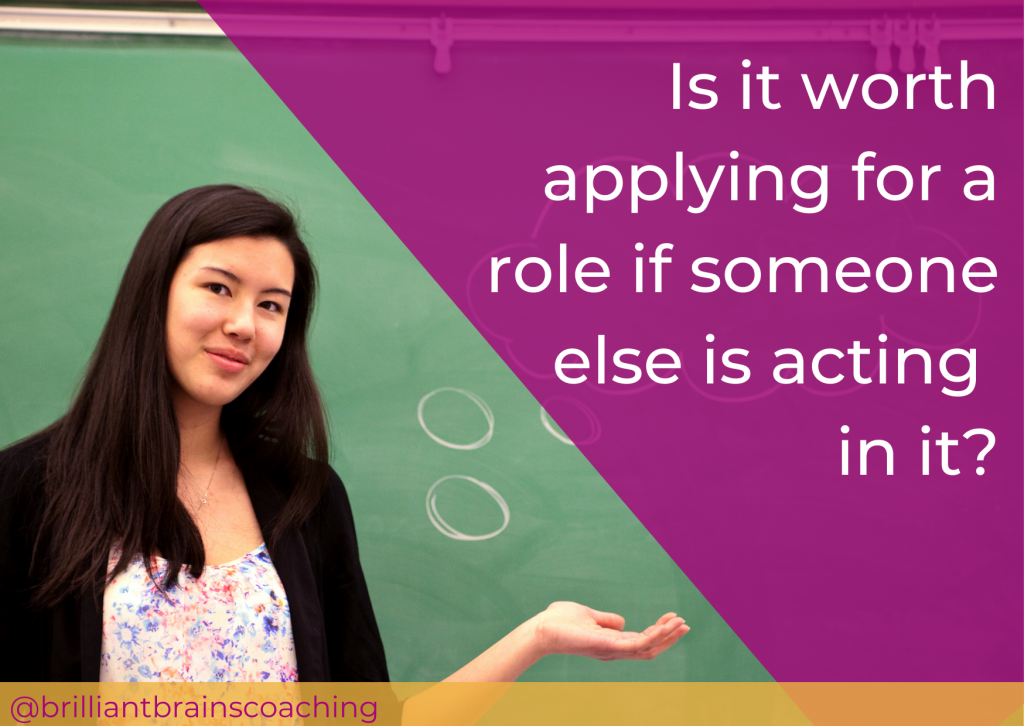 Is it worth going for a role, if someone else is already acting in it?

Is it worth applying for a role if someone else is acting in it? I've heard this so much as a leadership coach. It's said with a disheartening/frustrated/defeated tone. Whether or not this is the truth, the answer is always, "Yes. You apply. Yes. Prepare well for the interview."

It's worth it because you have nothing to lose.

They could lose to you. Their nerves could get to them  more than you. Their over confidence could mean they miss the obvious stuff in their responses but you didn't. They could lose the role they've been acting in because you were able to talk about your transferable skills so well.

You just never know what people are writing in their application and what they are saying in the interview. You have everything to gain, and nothing to lose.

It's worth it to make them notice you

Put your name in front of the people who see the applications.

Put your face in front of a panel to show them who you are.

The first role I applied for, the feedback I got from my principal after putting in my application was, "I had no idea you were interested in leadership".

I was shocked. Of course I was. Had I not put my hand up for lots of committees over the last few years? Had I not applied for and was successful at being the schools Numeracy Support Teacher? Was I not helping run whole school literacy and numeracy programs across the school to improve our NAPLAN results?

How could they not know?

That's when I found out this whole unspoken rule that you're meant to tell your executive team that you'd like to be a leader.  There was a conversation that had to be had well before you were going to apply so that they were aware. I just thought that I had to continue to show up and do the work and when its the right time, it'll be a natural progression.

So my advice is now, tell people that you'd like to get more leadership experience. It'll make getting access to opportunities easier too because you're name is now being used when talking about early adopters and aspiring leaders.

It's worth it to show up for yourself

The act of putting words on paper to the things you've been doing is enough to start to shift your reality around your career. Staying in your head about will mean you're staying in the thinking phase rather than the action phase. By keeping your energy in thinking, you're staying safe. There is no action happening so you're brain is satisfied that its doing it's job. Keeping you safe, the same and comfortable.

When you take those first steps towards the next level you, the universe will be saying, "Finally! Here she is. She's showing up. Now I can give her the opportunities she's been asking for." But you're brain will start freaking out. Its job is to keep you happy, and by taking action towards an unknown goal, you're brain will scream at you to not do it.

By going for the job, even if there is a perceived smaller chance of you getting it, will mean you're creating the life you want. To be a leader.

So, is it worth going for a role you have little chance of getting?

If you'd like help applying for leadership roles, let's talk about how you can get there. Book in a free 30 minute call so we can get you moving in the right direction.