How to Reframe Not Coming Up with Initial Idea 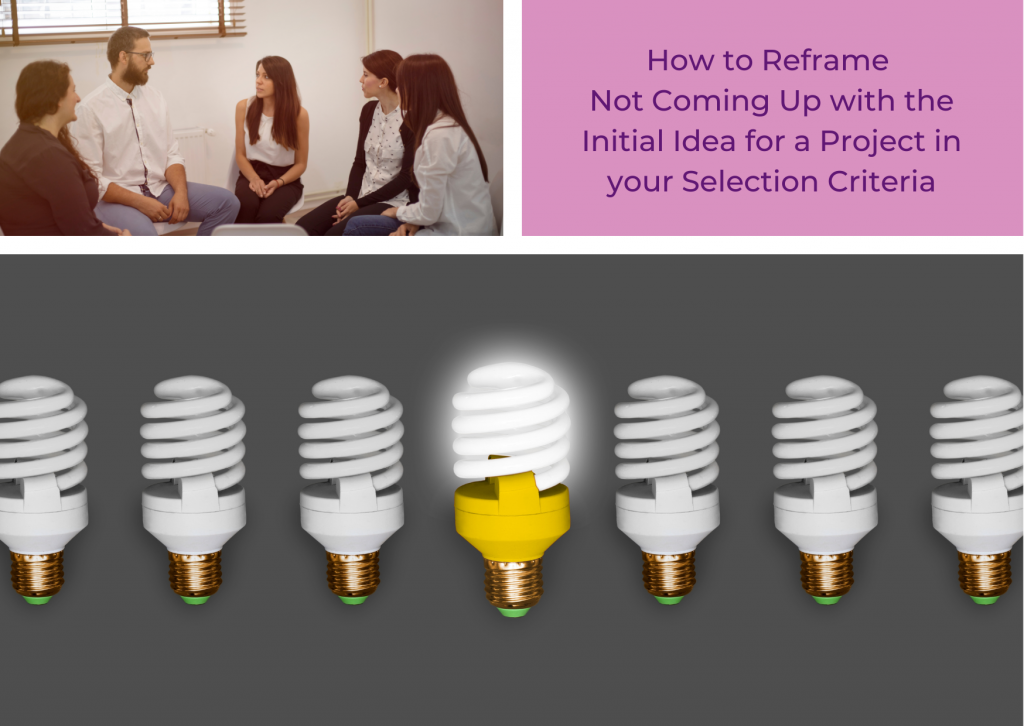 How to Reframe Not Coming Up With an Inital Idea

When putting your leadership stories on paper, writing from the perspective as the leader requires you to talk about why this story existed. This can trip aspiring leaders because  you did not come up with the initial idea yourself. Here is how to reframe not coming up with an inital idea for a story.

You do not need to be the person to have all the best ideas. As part of a leadership team in your school, the group will align and support the projects that are occurring. So whether or not, you personally had an idea to fix a problem in your school is nothing compared with your ability to work within that team to put in place and support the initiatives in the school.

However, the other side of the coin is, to GET a leadership role you need to prove that you can indeed be a leader. This comes to a head when you put your leadership stories on paper. As part of the STAR model, you have to talk about the situation for your leadership story (more about these in a blog post about STAR model and Starting with Why) and discuss why you started implementing what you did. Most aspiring leaders trip themselves up here because, they did not come up with the solution. They did the work but the initial idea wasn't theirs.

Here is three pieces of advice as a mentor to many people in this situation.

Reframe 1: The initial idea wasn't yours - and the panel doesn't care

It is a very rarely case that you are the person that came up with an idea and lead the project for it. More often than not, as a teacher, you do not have the full picture of what is happening in a school. You are busy in the class room with the business of teaching and learning. The Administration and leadership team are responsible for the bigger picture of what is happening in a school and rightly so because that is part of their job description and are paid accordingly. A teacher would not have as much awareness of the specific needs of a school and that is just a fact due to the way schools are structured.

Most likely, you were asked to take on the responsibility of leading. Someone pulled you in to ask you personally to take on leading a project. You're flattered. You feel acknowledged for the awesome work you do in your school. It sounds like a fun, new challenge for you professionally. So you say, "Yes", and relish in the opportunity to help the school out. It's a great feeling.

Perhaps you're really proactive in your career ambitions. As an aspiring leader, you want in on the action. After having an initial conversation with your line manger/HoD/Admin team, you've put it out there, that you would like to be a leader. It's through this avenue that you are now front of mind when the leadership team is looking for someone to lead an initiative. Perfect! That's what you want.

The issue comes when you go to write your leadership story down as a selection criteria story. The 'Why' in your STAR model, doesn't sound as powerful because you didn't find the issue and therefore the solution. You were bought in later to solve the problem. The panel knows that this happens. They've done it themselves! Don't sweat it. Just word it so it sounds like you were there at the beginning, which you were. More on this later.

This is the point of difference in mindset. When the administration team went to looking for someone to lead this project, YOU were the person they thought of. Because you've laid the foundations with the leadership team, you've had the conversations with the right people, you're doing great work in and out of the classroom and therefore, you're name is in the mix.

You are the early adopter! You're a rare gem in your school community that wants to grow professionally and do that through a position of influence in a leadership position.

It could be the case that you weren't personally approached at school but you send in an EOI to be considered for a specific role instead. Awesome! You won the role over others in your school. What? You were the only one that applied and therefore they had to give it to you. Great! You are again being seen as an early adopter, an instigator of change and proactive in your desire to be a leader.

Which every way it happens, YOU were the one that did the work and lead a project. Claim it. Own it. By doing this, you'll be writing from a position of personal strength rather than grateful opportunity.

Reframe 3: How to word your sentence starters that don't make you sound 'weak'

So now you're going to write your 'Why' in your selection criteria and you need to remain truthful about how you became involved in a project whilst not giving away your leadership power.

Here are some suggestions

If you'd like support in putting together your selection criteria responses, book a free 30 minute call to discuss what you need help with, I'll provide actionable advice and we can discuss how you can continue working with me to go deeper. Book a call here.